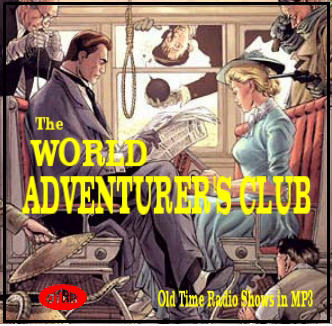 The year is 1932, and the nation is still suffering from the effects of the Great Depression, recovery is in sight, fueled by industry success as much as government programs. The listeners of The World Adventerer’s Club and other travelogue series in this early part of radio’s Golden Age were offered glimpses of exotic places and extraordinary events without leaving their own front room. The renewed interest in far off lands and cultures was, at least in part, also a reflection of the political situation. Many nations during this time were expanding their influence around the globe establishing colonies and outposts. You can still hear a faint echo of this influence in the stories -- some of the episodes carry a decidedly “colonial” attitude toward the native inhabitants of these countries … who are sometimes characterized in a manner that, by today’s standards, would be offensive. The setting for the series is a well-to-do gentleman’s club of the type that flourished in the 1890’s from Europe to the US. There’s even an all male chorus on hand, common to those establishments, which each week extols the virtues of living on the edge where adventures, discoveries, and the real threat of death are constant companions Using the cigar-smoky, brandy in hand, parlor as a backdrop, each episode takes the form of a report being told to the other members of the club by someone who’s just returned from some adventure in a far away, mysterious place. Members in the radio audience need only sit back in their chair, close their eyes, and imagine that they, too, are basking in the camaraderie of the club – as they share their experiences. Sadly, nothing is known about any of the regular cast members of this show. We do know that Hanley Stafford was the featured story teller in at least six of the episodes. Hanley Stafford, who was born on September 22, 1889 as Alfred John Austin, took his stage name from his birthplace of Hanley, Staffordshire in England. No stranger to US radio his was the voice of “Daddy” for “Baby Snooks” and “Dithers” in the “Blondie” radio program. He died of a heart attack just a couple weeks before his 79th birthday on September 11 1968. The series was transcribed by a California company named Transco. Of course, one of the benefits of transcription is that all 32 of the 15-minute episodes produced are still available for us to enjoy today. A tribute to the enduring nature of this series, it should be mentioned that much later, from January 1947 to January 1948, another series borrowed it’s format for a set of 30-minute episodes under the simplified name The Adventurer’s Club. And now, find a deep wingback chair, lean back, and prepare to enter a time when most of the world was truly unknown and any exploration revealed wonders, opportunities and dangers. From the Old Time Radio Researcher's Group. See "Note" Section below for more information on the OTRR.

World Adventurer Club was a real honest to goodness club for.. world adventurers! It was rather exclusive, made up of a clicque of *real* adventurers. Not just travelers, but adventurers. This is *NOT* the Disneyland exclusive club, this is a totally different club, and in a different location than the "secret Disneyland club"
Here is text from The Adventurers Club:
The Adventurers' Club of Los Angeles® is a private men’s club located at 2433 N. Broadway, Los Angeles at the corner of Broadway and Daly. Meetings are held every Thursday evening throughout the year except Thanksgiving and the last two Thursdays of the year. Ladies Nights are planned throughout the year.
" The Adventurers’ Club of Los Angeles® is a private gentlemen’s club, tracing its roots to Teddy Roosevelt and friends in a 1908 meeting. The Club was founded by Captain Jack Roulac in 1921, and was incorporated in 1922. It is dedicated to world-wide adventure – travel off the beaten path.

Since its founding, Club members have met nearly every week to share their exotic adventures. Our members have traveled from the Oceans greatest depths to outer space and the many wondrous places between. Whether trekking across Death Valley, climbing the Himalayas, diving the Arctic and Antarctic or sailing the worlds waterways – land, sea, air, and beyond, members of the Adventurers’ Club share a common goal. They leave the beaten path to explore the globe and return to share their adventures. The Adventurers’ Club also invites other world-class adventurers to share their tales. "

Sort of like a club for guys in the beer commercial" The World's Most Interesting Man".

If your grandfather was in the OSS, or captained a ship and single handedly fended off pirates, he'd be the sort of member they'd have.

These aren't patronizing, I did not find it offensive in any way, in fact I find it rather informative. Keep wonderful recordings like this in circulation. We need them.
Some people who listened claim to be "offended". Well, let me educate you that the word "savage" is meant as it's literal definition and not the derogatory insult. A man IS a savage if he is not civilized.
Reviewer: kumarihpx - favorite - December 20, 2014
Subject: Hard to like anything about this one
These are very simple and short stories which show the ignorance of Americans in the early 20th century. The premise is that these world adventurers meet at a club to brag to each other about their experiences: it's cheesy, self-agrandizing, slimy, and nationalist and straight-up racist. The show is all about how Americans are better than any and everybody else, and that's baloney, and ANNOYING. Actually, it made me kind of nauseous, so YUCK.

I will give the series one star but ONLY because it contains information about far-away places. I have no idea if it;s accurate information, given the other values the creators espouse, though. Still, I would not recommend this to anyone I know.

1/5 stars
Reviewer: Poe1809 - favoritefavoritefavoritefavoritefavorite - February 21, 2011
Subject: .
These are fun shows that I strongly recommend. The initial reviewer nailed the basis for the show, and the only thing I differ with him on is 13 minute format. I actually like the shorter format shows such as this; another show with the same format is The Strange Dr Weird, and I've always marvelled at the ability to give a solid story in such a short amount of time. Five stars from me, since the quality of the recordings is excellent for the era.

As for the other reviews here, what is the 2nd guy purchasing? These are all here for you to download.

The review directly below me makes the mistake of attempting to judge a show from a previous era through the lens of today's PC world, and it seems to hurt his ability to enjoy this program, and most likely every other media created prior to 1995. My advice would be to simply relax. The world is an often messy place, and not everything is going to mesh with the fantasy world certain people expect the entirety of human existence to conform to.
Reviewer: gl1200phil - favoritefavoritefavorite - February 21, 2011
Subject: Fanciful fairytales
This does have some entertainment value. However, the arrogance, bigotry, sexist attitudes and assumed western civilization superiority, seems to be the "brightest shining light", which (IMHO), tarnishes some of the stories. Superstitious, ignorant natives and unflappable white male heros are rampant themes woven through all these stories. As a citizen of the US, I find that the "four magic words", which seem to convince the natives to surrender part of the time is quite embarrassing. With their backs against the wall, our "heros" never forget to try the magic words, "I am an American!"

These shows are rather fun, but they say a lot about the mindset in the post-Victorian era, which reduces some of these stories to trite fluff!
Reviewer: qrper - favoritefavoritefavoritefavoritefavorite - April 6, 2010
Subject: Time Travel
I love this series and will, probably, purchase it. It takes me back to the time when much of the world was still undiscovered. And, when science and technology was advanced enough to be of use. For example 1932 radio...the date of these programs. I would have loved being a healthy, young adult back then. Places to go, things to see, perhaps for the first time by anyone. Now, I must content myself with armchair adventure.
Reviewer: Tesla's Death Ray - favoritefavoritefavoritefavorite - March 4, 2007
Subject: Calling All Explorers, Big Game Hunters and Treasure Seekers!
I hadn't even heard of this series until this weekend - and that's a terribly sad thing because these types of stories are right up my alley.

Anyone who enjoys the Pulp Era will get a pleasant kick out of the World Adventurer's Club. Imagine a society filled with Indiana Jones-types: learned men who cross the globe in search of adventure and glory. Now imagine that this society gets together for regular meetings where they share the tales of their travels. That's pretty much what the World Adventurer's Club presents.

The only drawback of the show is its 13 minute format. You often come into the stories halfway, and that's a shame because your mind starts to wonder what the show could've accomplished with a half hour. That's the reason I have to give it four stars though the quality of the files is fantastic given the years this show aired.

Side Note: If you are a fan of this genre and are ever vacationing at the Walt Disney World resort, be sure to visit the Adventurer's Club at Pleasure Island. It's an attraction where you literally walk inside a society such as this, complete with incredible props and actors who stay in character with their 1930s roles the entire time. They put on skits and shows and visitors can interract with the props and exhibits. I had an incredible time there. Here are some links explaining it.

Uploaded by OTRRArchive on December 20, 2006